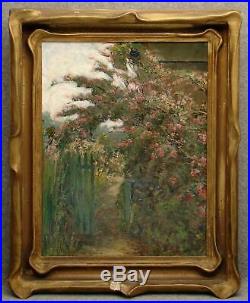 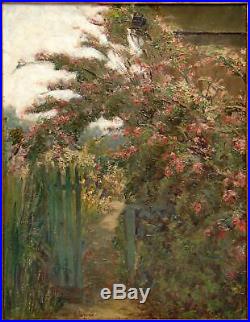 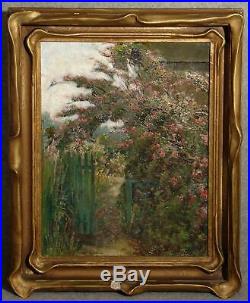 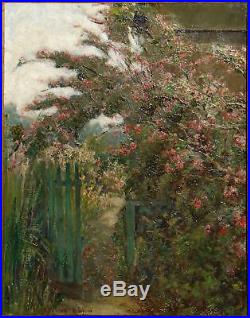 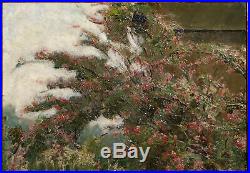 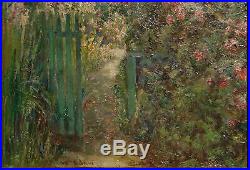 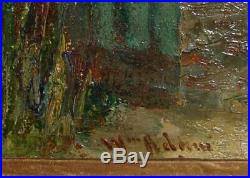 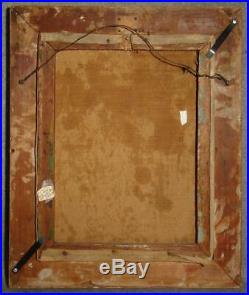 From an upscale South Florida estate, this is an original antique oil painting by well-listed artist William Constable Adam. Excerpted from Wikipedia: William Constable Adam (29 August 1846 17 October 1931) was an English-born oil and watercolour painter of Scottish ancestry who spent the last 33 years of his life in California, United States. Adam was born just south of his paternal Scotland in Tweedmouth on the outskirts of Berwick-upon-Tweed in 1846. After completing grammar school, he began evening classes at the Glasgow School of Art. At the age of 19 he traveled to South America, studied art in Buenos Aires, worked as a broker in Montevideo, and later published a serialized travelogue of his adventures. On his return to Scotland (early 1870s) he continued his art training under Robert Greenlees and Robert Brydall, and was an early member of the Glasgow Art Club. After travels in north Africa and advanced training in Paris under Auguste-Joseph Delécluse he exhibited at the Royal Scottish Academy and the Royal Glasgow Institute of Fine Arts. William Adam migrated to the United States in 1893-94, settled in Massachusetts, joined the Boston Art Club, and was co-founder and president of the Lowell Art Club. In 1898-99 he relocated to California and worked as an accountant for a mining company before moving permanently to the Monterey Peninsula. By 1901 he resided in the Methodist colony of Pacific Grove, California, began to display his paintings locally, and received an invitation to exhibit in San Francisco, California at the prestigious W. After changing addresses twice he occupied in 1906 the Pacific Grove home at 450 Central Avenue. Because he taught art class in Pacific Grove, he was known affectionately as The Professor. He exhibited at a variety of venues, including the Berkley Art Association (Berkeley, California), the Art Gallery at the luxury Hotel Del Monte in Monterey, California, and many private galleries in San Francisco. He spent much of his time at the nearby art colony of Carmel-by-the-Sea where he exhibited at the Arts and Crafts Club and the Carmel Art Association between 1906 and 1927. Especially popular with tourists were his (often repeated) renderings of the local Spanish architecture, lush gardens and charming scenes along the Pacific Coast. For competitive exhibitions he executed highly original landscapes which employed the bold dramatic brushwork of the French Impressionists. William Adam died in Pacific Grove on 17 October 1931. His Central Avenue address has been restored by the local Heritage Society. I photographed this painting under different lighting conditions. The first two pictures are under indirect lighting, and show the painting fairly well. The rest of the pictures are with direct lighting, which shows the richness of the paint and colors better, but also makes for a lot of white spots – THOSE are just reflections of the bright photo lights on the texture of the paint. Here we see a dirt path leading through the open gate of a green picket fence, into a garden that appears to be growing almost wild, with a profuse covering of flowers. Almost hidden is the wall of a building, perhaps the artist’s own Pacific Grove cottage. Frame Size = 17-1/4″ H x 14-3/4″ W Stretched Canvas Size = 14-1/4″ H x 11″ W Painting is signed at the bottom: “Wm Adam” There are also a couple of notes on the back… Died in Pacific Gr. Please keep checking Saler’s other items. For MORE of the Neat & Unique! Be sure to add me to your favorites list. Additional Keywords: Vintage, American, Fine Art, California artist, landscape, English, collectible. The item “LISTED Artist WILLIAM CONSTABLE ADAM Antique OIL Painting GARDEN GATE California” is in sale since Wednesday, April 29, 2020. This item is in the category “Art\Paintings”. The seller is “salerpaul” and is located in Hialeah, Florida. This item can be shipped to United States.