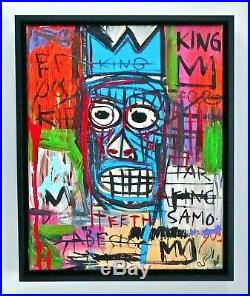 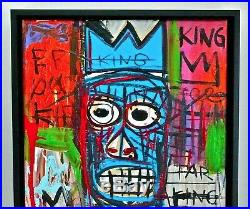 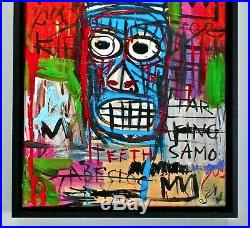 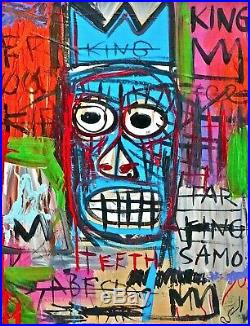 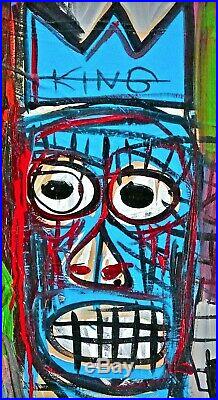 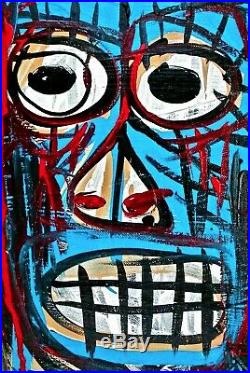 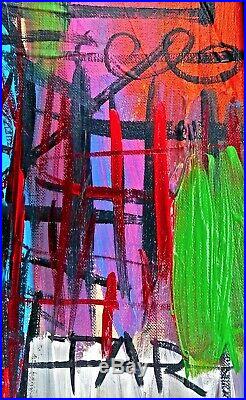 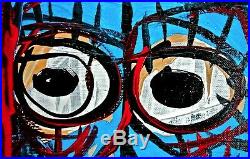 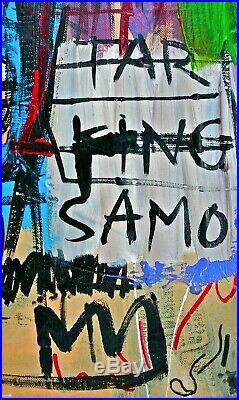 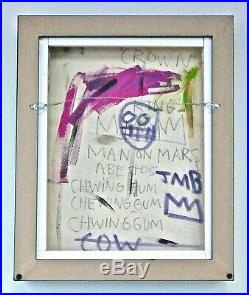 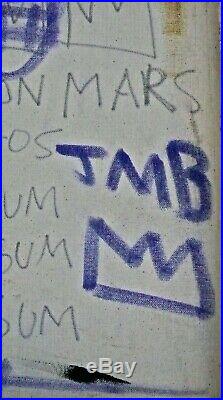 WELCOME TO OUR ART-MODERNE. TO CLEAR OUR INVENTORY. ALL ARTWORKS ARE NOW. 70% to over 80% OFF! YES, THAT’S ON EVERYTHING!! AND WE ARE OPEN TO OFFERS!! AN ORIGINAL ACRYLIC PAINTING ON CANVAS (“KING SAMO”) Circa early-1980s SIGNED. (This artwork came without any official COAs or gallery documents attached, hence it is offered in our Sale “as is”). NEW YORK -based 1980s art-star and former Graffiti -artist JEAN-MICHEL BASQUIAT was born in Brooklyn , New York , on December 22, 1960. With a Haitian-American father and a Puerto Rican mother, Basquiat’s diverse cultural heritage was one of his many sources of inspiration. A self-taught artist, Basquiat began drawing at an early age on sheets of paper his father, an accountant, brought home from the office. As he delved deeper into his creative side, his mother strongly encouraged him to pursue his artistic talents. Basquiat first attracted attention for his graffiti in New York City in the late-1970s , under the name SAMO. Working with a close friend, he tagged subway trains and Manhattan buildings with cryptic aphorisms. In 1977 , Basquiat quit high school a year before he was slated to graduate. Three years of struggle gave way to fame in 1980 , when his work was featured in a group show. His work and style received critical acclaim for the fusion of words, symbols, stick figures, and animals. His rise coincided with the emergence of a new art movement, Neo-Expressionism , ushering in a wave of new, young and experimental artists that included Julian Schnabel and Susan Rothenberg. In the mid-1980s , Basquiat collaborated with famed pop artist Andy Warhol , which resulted in a show of their work that featured a series of corporate logos and cartoon characters. A heroin-addict , Basquiat died of a drug overdose on August 12, 1988 , in New York City. He was only 27 years old. Although his art career was brief, Jean-Michel Basquiat has been credited with bringing the African-American and Latino experience to the elite international art-world. His large-scale acrylic paintings on canvas now often command prices well into the many millions of dollars. This is a unique NEO-EXPRESSIONIST work in ACRYLIC PAINT with some OIL-STICK on CANVAS. Entitled: “KING SAMO” It is a very impactful and vivid ORIGINAL PAINTING on CANVAS featuring a SINGLE HEAD bearing a CROWN with HANDWRITTEN (PAINTED) TEXT. Mounted as a “float” the canvas measures: 20″ x 16″ (51 cm cm x 40 1/2 cm). The black wood, “deep-dish” frame measures: 21 1/2″ x 17 1/2″ x 2 1/2 in depth (54 1/2 cm x 44 1/2 cm x 6 1/2 cm in depth). It is SIGNED as follows: SAMO , on the front. Also, SIGNED as JMB , on the VERSO. Various Basquiat “CROWNS” are depicted as well. Not dated, estimated to be from the early-1980s, during the time Basquiat was transitioning from using his Graffiti name, “SAMO, ” to his real name. The painting is absolutely an ORIGINAL WORK on canvas; NOT a print or lithograph or any other kind of reproduction. In VERY GOOD CONDITION. We have MASSIVELY DISCOUNTED this rare and UNIQUE signed original work to way below normal market values. These acrylic paintings on canvas are the most collectible of the paintings that Jean-Michel Basquiat made, second only to his super-large works on canvas —which are valued at prices far, far in excess of these medium-format canvas paintings. Now DISCOUNTED lower even than our usual below-market pricing!! Now over 85% OFF!!! Only during our SALE!! Or, make us a “BEST OFFER” if you prefer. Also, p lease view our OTHER BASQUIAT PAINTINGS in our SALE! And via trackable UPS Ground for the mainland United States. We can also accept bank-to-bank wire payments from overseas as well as American-only personal and company checks. All payments must be in U. All auctions and sales are final. Thank you for visiting our Art-Moderne Gallery Auctions & Sales online! The item “JEAN MICHEL BASQUIAT – A 1980s, ORIGINAL, NEO EXPRESSIONIST, ACRYLIC PAINTING” is in sale since Saturday, February 1, 2020. This item is in the category “Art\Paintings”. The seller is “art-moderne” and is located in Beverly Hills, California. This item can be shipped worldwide.