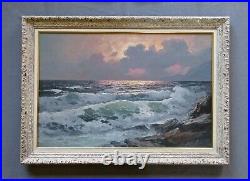 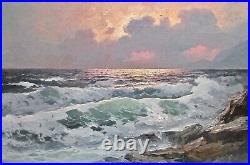 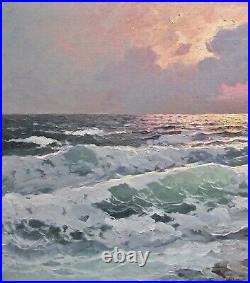 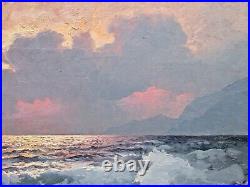 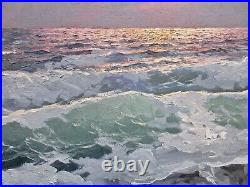 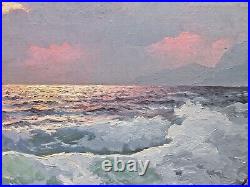 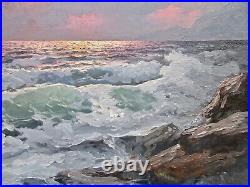 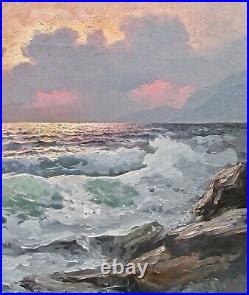 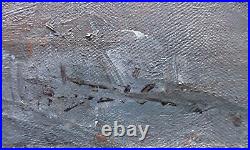 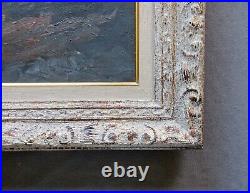 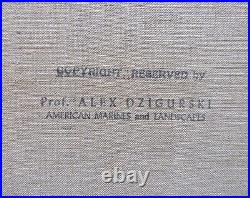 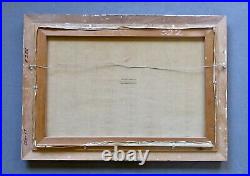 This beautiful vintage painting was completed on canvas and signed by the artist on the lower right A. Alex Dzigurski, American Marines and Landscapes. The artist does a wonderful job of capturing nature’s majestic beauty in. A luminous glow that is diffused throughout the whole painting. It is an excellent example of the artist’s work. It is in very good vintage condition. Under a black light it shows no signs of paint loss, in-painting or repair. Unframed the painting measures 24″ in height x 36″ wide and together with the vintage gesso and wooden frame it measures 36″ x 42″. The handsome vintage frame has a depth of 1 1/2 and it is also in very good vintage condition. As for the artist, Alexander Dzigurski is known for his seascapes, landscapes and portraits and is associated with the art of California. Alex was born in the farming community of Backa, located in Stari Becej, then part of the Austro-Hungarian Empire. The son of a wheat farmer, he was one of four siblings. Alexander’s father considered his son’s artistic desires an unproductive pursuit, however, his mother was most interested in her son’s talent, and understood her son’s wishes to extend his abilities beyond the farm. With the assistance of the Serbian Church, he went to Belgrade, where he lived at. Monastery and attended the School of Art. He painted portraits for private families and did restorations of old iconostases as means of support. After graduating at age 18 in 1929, he continued his studies at Munich’s Academy of Art. Then, for two years he volunteered in the King’s Navy (Kingdom of Yugoslavia) beginning in 1939. His experiences provided his first works of his sea paintings. After his military period, he married his high school sweetheart. A daughter was born in 1933 and he soon opened “Zograf”, his first studio. In 1941, Dzigurski was activated into the Yogoslav army communications division. Several weeks later, Hitler’s army took most of his unit prisoner. Dzigurski managed to escape. Yugoslavia continued to be dissolved by the Germans, thus forcing Dzigurski to relinquish his succesful studio and depart for Italy. In 1949, the Dzigurski’s departed Naples, Italy and arrived in New York Harbor aboard the Marine Jumper. His former Yugoslav professor introduced the family into the Serbian Orhodox Church community. Familiar with Alexader’s work, the Bishop had him paint icons (traditionally Byzantine) for a small memorial chapel in Pennsylvania. He would later be commissioned to paint the alters and interiors of nine Serbian Orthodox churches between 1951 and 1960. His beautiful works were not signed, remaining anonymous like most of the orthodox ecclesiastical painters before him. Dzigurski viewed his art as a sacred craft, excluding the intervention of human inventions. By about 1952, Alexander settled his family in California and began to paint seriously, particularly along the coastlines of northern California and Oregon. In 1968, a period of depression followed the death of his wife, and he lost interest in life and painting. While recovering from a broken arm, Dzigurski became fond of, and married his nurse. With renewed optimism and the birth of his son, Alexander Jr. He vigorously began painting again. His seascapes and landscapes are most realistic and have broad appeal. His extensive travelling in the United States can be seen in his works from the Smoky Mountains, the Grand Tetons, Mt. Shasta, the Rockies, Glacier National Park, New England and other coastal communities. Was a member of the Artists of America Association and exhibited his paintings at the Charles Russel Museum in Great Falls, Montana and with the Artists of America Denver, Colorado Rotary Club. His paintings can be found in may private and public institutions like the Franklin Mint Museum of American Art in Pennsylvania, the Republic Bank of Dallas, The Michagan Bank of Chicago, Illinois, the Ravenswood Bank of Chicago to name a few. Having become one of America’s well-known artists, Alexander Dzigurski passed away in 1995. This work to be an original Alexander Dzigurski painting. I described the painting’s condition accurately. Judge for yourself from all the detailed images provided. The item “Listed Artist Alex Dzigurski (1911-1995) Large Nocturnal Oil Seascape Painting” is in sale since Monday, March 16, 2020. This item is in the category “Art\Paintings”. The seller is “auntiegmg” and is located in Johnston, Rhode Island. This item can be shipped to United States.